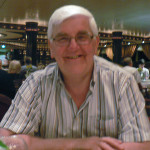 Has been involved in Information Marketing since 2004.

Originally he left secondary modern school at the age of 15 with no academic qualifications but a decent right foot and a turn of speed. It was obvious when his football career fell apart that he should spend his time getting an education. First, aligned to marine engineering as he was an apprentice engineer {Yes apprenticeships were available then, they have not just been dreamt up by a 20th century Government :-)}. He obtained his Ordinary then Higher National Certificates in Engineering, that opened the door to a University life but he chose to continue getting his hands dirty. Much later in life while developing his sales career he opted to study for his BA in Business Administration, later going on to achieve his Masters and finally his Doctorate  in Business Administration, Sales & Marketing From his BA onward, he studied through open long distance Universities rather than attending Red Brick Universities.

He started his sales career in  1993 following a severe knee injury which cut short his football career. Like most people in sales, he drifted from company to company, entering Sales Management with a badminton racquet manufacturer. Possibly only because, he was playing badminton at County level and met and befriended the sales director of the company he later joined as sales manager.

He entered financial services via a direct sales force opportunity advertisement. Quickly rising to Assistant Branch Manager and then Branch Manager qualifying on the way for Chairman’s Club. He developed his branch turnover to over £20 million per year and was responsible for recruiting and training around 80 commission-only-direct sales individuals.

During his time in financial services, he built a successful platform offering goal-setting and personal development training courses which were a side benefit of the training courses he developed to help the salespeople in his branch achieve their life goals. Of course, he did not have a 100% success rate but the normal 80/20 rule appeared to apply.

His message to sales people no matter their industry is that those individuals that could be labelled as successful were those who displayed a passion for their products and accomplish an aim or purpose.

This site is devoted to those who want to work from home regardless of age or sex in this great industry called Information Marketing.

His personal email is david@daviddutch.com, as this is his private mail, he will come back to you if you have any questions or would like to see something that is not covered in the website yet!

Please go to Appearance → Widgets and add some widgets to your sidebar.